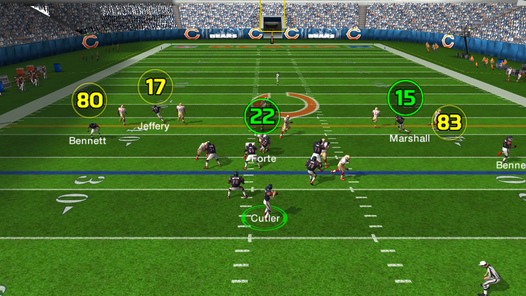 It’s that time of year again when stress takes over, friendships drift and fans of many colors, cities and mascots get together to celebrate victory and agonize in defeat. I’m talking about football season, and it’s back in full swing! For some people this means watching games on Sundays with friends and family. But others take the ultimate fan approach by  participating in fantasy football leagues and/or spending hours playing Madden NFL 15  To some these activities might seem like a waste of time, but did you ever think how beneficial they could be to the average business student? Let’s take a look.

Fantasy football is a game application that allows up to 20 individuals (owners) per league to draft real-life NFL players to fictional teams. Each week, players go head-to-head with fellow league members. The better their players perform in the real-life games, the more points they score in fantasy football. During the draft session must successfully draft one Quarterback, two Running Backs, two Wide Receivers, one Tight End, one Flex Receiver/Running Back, one NFL Defense, one Kicker, and seven bench players of any position. The trick is that like all sports, there are a few superstar athletes and many average Joes. That creates the competition for fantasy players to try their best to draft, trade and pick-up the best players.

During the season, owners must move players around and set their starting line-ups each week in a way that will get their team the most points. It takes a lot of research to stay up-to-date on players that get injured, suspended, have off games and move up or down in position rankings to determine who plays and who doesn’t. All of these conditions can throw off an owner’s chance of winning or not winning a match against another owner’s team. This game is similar to the business world, specifically human resources, because it’s all about recruiting people and positioning them in the best places to benefit the team, or company. Monitoring the day-to-day status of players is important in fantasy football just like in business it’s important to assure that all employees are performing well and goals are being met. I bet all of you fantasy owners didn’t realize how much business you’re really conducting through fantasy football.

Now let’s take a look at Madden NFL. For the past two decades, video game maker EA Sports has released a new verison of Madden every year with new features, up to date rosters, and enhanced graphics to make the game as real as the actual game of football. Many players of Madden enjoy taking part in the Association feature that allows users to control a team from a general manager’s (GM) perspective. Once a user decides what team he want to manage, he instantly starts making executive decisions regarding the team that an actually owner or GM would make. He must handle all marketing situations of how the team is advertised to the fans, how to generate the most money from merchandise, what kind of food to sell at the stadium and what kind of incentives to offer the fans. Players must also hire and fire coaches, assistants, partners and coordinators, sign and resign players and adjust player contracts for years at a time, balance a team budget to prevent company losses, organize a depth chart of player positions and skills by ratings, organize practice and training times for the teams, address emails from players, coaches and staff and after all that, still try and win the football game.

The Madden Association feature is the closest virtual game to being your own boss and managing a team as you’re going to get! Every decision you make affects your organization positively or negatively. Many people wouldn’t think playing video games was effective in practicing management performance, but gamers will actually use all of their business knowledge to complete several NFL seasons in the Association. And it’s not just Madden. A feature similar to the Association can be found in NBA 2k games, FIFA Soccer games, NHL Hockey games and MLB games.

Who knew managing could be so fun?